Another important field of activity of our office is trade mark protection. If you wish to characterize your goods and services with a trade mark, it is possible to protect this trade mark from plagiarism at home and abroad.

Signs that are suited to distinguish the goods and services of an enterprise from those of other enterprises are protected as trade marks. Trade marks may consist of words, letters, figures, illustrations, three-dimensional objects and acoustic signals.

A trade mark need not be novel. Also trade marks that have already been used may be filed and registered. However, before a trade mark is filed or used, a search for objecting older rights of third parties should be performed to avoid collisions. 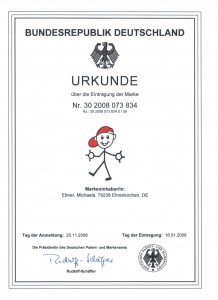 Examination procedure: Absolute grounds for refusal of the registration of a trade mark must not exist. This means that the trade mark may, for instance, not consist exclusively of indications that are descriptive and/or mandatory to be kept free for goods/services for which it was filed. Neither must a trade mark be misleading. Such grounds for refusal are examined by the Office and may result in objections that may be invalidated by the applicant by the filing of counter arguments and/or by restricting the goods/services. If the Office maintains its attitude, the trade mark application will be rejected. The remedy of appeal is possible against the decision of rejection.

Use: Within five years from registration or – if an opposition is lodged – from termination of the opposition procedure the trade mark will have to be seriously used for the registered goods and/or services in the area of application of the trade mark. For this purpose, the trade mark should preferably be applied on the good or its package. For goods and services for which the mark is not used during a continuous period of more than five years, the mark may be cancelled on request of a third party.

Renewal: The duration of protection of a trade mark is 10 years and may be renewed on payment of a fee by another 10 years as often as desired.

"Ideas are like rabbits. You get a couple of them and learn how to handle them, and pretty soon you have a dozen."
John Steinbeck

"The origin of all technical achievements is the divine curiosity and the play instinct of the working and thinking researcher as well as the constructive imagination of the technical inventor."
Albert Einstein

"Invention is the only characteristic of the genius."
Luc de Vauvenargues

"Inventions, namely, require undisturbed silence, calm, permanent thinking and devoted testing, and all this is only given by loneliness, not by the society of people, as we may also see with Archimedes."
Gerolamo Cardano